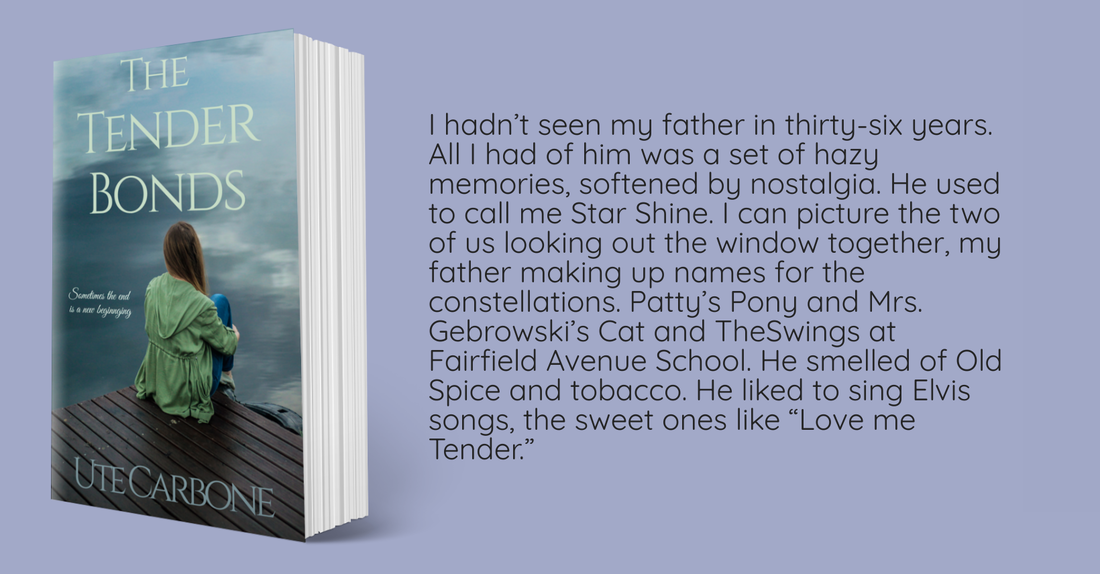 On the last day of kindergarten, Patty Dykstra’s mother picked her up after school and told Patty they’d be going on a trip to visit an aunt in New Jersey.  Six-year-old Patty didn’t know she and her mother would not be coming back, and that she would leave behind her father, her home, and the only life she’d never known.
Thirty-six years later, Patty discovers cards that had been written to her by the father she had been told was ‘gone’.
Patty travels back to the to the small town she left behind as a child to find the man who used to call her starshine, the father she barely remembers. What she finds both surprises and shocks her. Jack Dykstra is a far cry from the man she idealized as her daddy.  And Patty must learn to stand up for her own self-worth in order to accept and forgive him.

Patty’s life-changing journey isn’t a syrupy-sweet one, but the author paints it with sweet moments woven in and with brilliant imagery. At points, Carbone’s writing almost sings off of the page, in notes that range from discordant to melodious. 4 out of 4 stars from Online Book Club

Beautiful words, elegantly strung together, this is a wonderful example of writing from the heart reaching towards the hearts of even the most calloused readers.  Tome Tender Book Reviews

The Tender Bonds grabs your heart and holds on. That the author writes beautifully is frosting on the cake. I loved this book.
Patrica Dusenbury, author of The Perfect Victim
Ms Carbone has a writing style that grabs all five senses, twists them about and leaves the reader laughing, crying or simply just wanting more. Her voice in The Tender Bonds is brilliant, conjuring up a small American town where prim and proper Patty Dykstra ends up in search of her family.
Susan Roebuck, author of Rising Tide

I'll let you in on a secret--I began writing this book a very long time ago.  I can't quite remember the year it was (yup, that kind of long ago), but it was drafted back in the days when I was teaching writing workshops. Each week, my students and I would gather to write and to listen to each other's words. It was a transformative experience for me. I wrote quite a number of novels and stories and poems during the twelve years of the workshop.
​Like most of my books, this one grew out of a meeting of several ideas. I've always thought setting is central to a book. We exist in space and time, after all. Characters are no different, they are molded by where they live and the times they live in. I grew up in a small mill town in upstate New York. It was a pretty place, nestled into the foothills of the Adirondacks, but it was also a place that had fallen on hard times. The once thriving mills were slowly closing down, unemployment was high. It's an old story, and one that has as much resonance  for people today as it did back then. I was also a bit of an outsider. I looked and talked like all my friends, but I was 'the German Girl', the one with the funny name whose parents spoke with thick accents.
​All of those themes, place and stranger at home, were playing around in my head when I read a book about a woman who went to care for her estranged father. The book was quite different from the one I wanted to write, it was set in Europe, the father was an artist who was temperamental and used to living out on his own. But the idea of going back to a home you'd never really known stuck with me. And so The Tender Bonds was born. I wrote it in fits and starts. I was busy in those days, with a business to run and two growing boys to care for.
When I finished it, I gave it to a few trusted friends who loved it. But it was a little close to home, maybe too close. It was hard to think about the inevitable rejection because the themes running through it were like a river reflecting my own life. So I didn't really send it out much. I left it to sit while I went on to write a bunch of romantic comedies that were light and fun. I love the rom. coms, they have a cheery place in my heart (and I hope in yours, too), but let's face it, they didn't dive deep. They didn't ask of me as much as this much more serious book had.
​Fast forward a bunch of years. I had begun publishing with several small presses. One of them, Turquoise Morning Press, had taken on another women's fiction I'd written, Dancing in the White Room. I got to work on the book with Karen Block, a great editor who helped bring that book to it's full potential.  And it felt like time to bring The Tender Bonds out from under the covers. Karen loved the book from the start. We worked on it for several months and it was released in May of 2015.
TMP, like many small publishers, wasn't doing well. In September of 2015 they closed their doors. And the book was returned to the unpublished work file on my computer. The publisher was nothing but fair about giving the rights to stories back to her authors. She even gave us the rights to covers, which is a step beyond what was necessary and a very generous thing to do. Karen wrote to say I should get the books back out. But I was heartbroken. It was hard to look forward. I hadn't sold more than a few copies and I began to wonder if the whole endeavor was worthwhile.
​There is a difference, though, between writing and publishing. I wrote this book for myself, in the hopes that it would touch others. Patty's journey is something I believe is universal, her need for connection and for belonging something we all feel, her need to forgive even when it was hard something we all face. And so I have republished it under my own name.
​Though of course I hope the book is well read and well received, I may well only sell a few copies. Let them be to readers who need to hear Patty's story. If it touches you, dear reader, this book's long journey into your hands and your heart will have been worthwhile.
In Print
E-Book